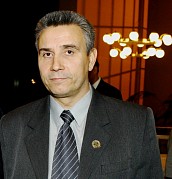 He developed the philosophical concept of the Unified theory of ideas, in which the question of primary and secondary is removed, and matter and mind are considered as one eternally and infinitely dialectically developing and manifests itself in a variety of systems; It is the initiator of the scientific development of the principle of national policies and the construction of the political reality of regions based on ethno-religious determinants. He developed a system of ideas of interaction of ethnic and religious factors and their influence on the political stability of the state; considered the issues of the individual in the system of social relations. He stood at the origins of the revival of the Russian genealogy. Founded in 1996 by the Moscow genealogical association, he headed it for 10 years.

• I believe that education - it is not education.

• I have been faithful to the principle:   Do what you must, come what may.

• Better care for children   - be it in relation to them are not pious and good.

• I believe that the key to success in life - is education and the presence of   commitment.

• What motivates me in life - the result of my work, which has brought benefits to people.

Interviewing to identify the abilities, aptitudes of the child and selection of effective training programs

For training at the Centre is required to pass an interview, where you will receive:

« Indeed, developing   the skills and knowledge that help
.
We are easy to do homework, we had a great learning in school. We started with 5 years to do, it is very effective. Now valued professionals. Aristotle thank you!»

Elena, mother of Veronica and Nikita:

« Study in Aristotle - this is interesting ...

The education of children is necessary to invest! If you want to give a child a good education, I advise you to give this education is in Aristotle. It's really a godsend.»

We do not just recommend, we have recommended to many, and many of our senior class came here and were also very satisfied. Main advantages - great technique, friendly attitude and love of children to teachers.»

« A different approach of teachers. They do not require, and explain.

Here a completely different approach, they are looking for logic, if my child understands the logic, then it can go further. From us a few people already goes to Aristotle. It is necessary to invest in quality education.»

« This is not a school. Those who know, understand ...

Very popular with the teachers and us, and, above all, children. Like how they are taught how to communicate with children. This is very useful for children. At school they do not teach and familiarize. So, it is in the Aristotle taught.»

Thank you for your request, our manager will contact you